Solidarity from Rojava to Chiapas with the Zapatistas 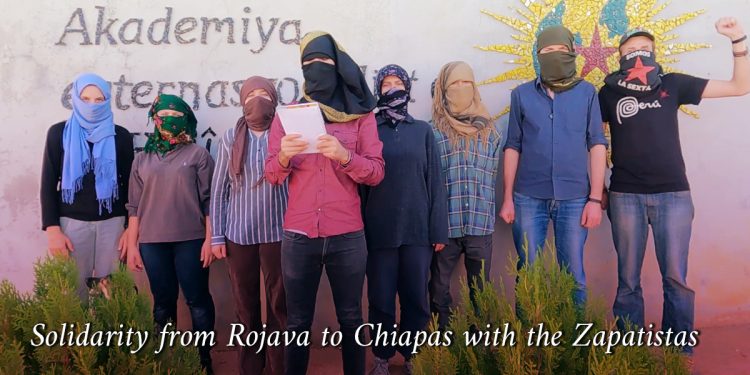 ROJAVA – Taking part on the call from the EZLN from Chiapas on this day, for the “Global Action day against militarization and the capitalists war”, the internationalists present on the Internationalist commune of Rojava shared a video message with a statement in Solidarity to the Zapatista struggle.

“Today, October 12, marks 530 years since the Western empires arrived in the Americas to plunder, exploit and massacre indigenous peoples. But more importantly, it is 530 years since these same indigenous peoples and communities began to resist against the barbarism of patriarchal capitalism. 530 years later, the resistance and rebellion of native peoples against invasion, dispossession, exploitation, and the extermination of indigenous culture and languages is more alive than ever, raising, with it, different democratic alternatives raised on the common principle of a free life.

Today, October 12, the Internationalist Commune of Rojava wants to join the Global Action against Militarization and Capitalist War and to stand in solidarity with the Mexican people, the Zapatista Army of National Liberation and the Zapatista Communities that are suffering attacks by the Mexican government. Military activity continues to grow in Chiapas and with it tensions that could lead to a new aggression against the sovereign Zapatista people.

Capitalist Modernity, submerged in a state of global crisis, is collapsing in the face of a society expressing its desire for freedom. The revolution in Iran is a symptom of this impulse for freedom. Times are changing and Democratic Confederalism together with the Zapatista people is illuminating the new democracies to emerge. Today, more than ever, it is necessary to stand in solidarity with the sovereign peoples who resist the constant attacks of imperialism that want to deny their existence. Solidarity is the tenderness of the peoples.

All power to the people! Until victory always.”