The attack of the invading Turkish state on the mountains of Kurdistan with chemicals shows that it was defeated in the face of the will of the Apoyî.

by Firaz Dağ
in All News, Analysis, Editorial, Headline, Middle East, News, Special
A A
0 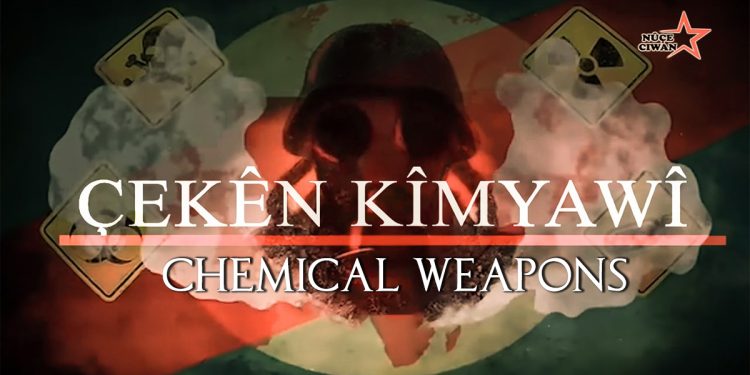 NEWS CENTER – Despite the use of chemical weapons being banned by international conventions, the occupying and colonial Turkish state continues to commit war crimes by using them against the guerrillas.

What is a chemical weapon?

A chemical weapon is endowed with poisonous properties and is used for targeted killing. All tools and equipment used for chemical weapons are special items. Therefore, it has deadly effects on the body when it comes into contact with a living being. Although its use is banned in international conventions with the approval of some states, it is still used in wars and has caused the deaths of many people. Chemical weapons, which have been used in assassination and war throughout history, can easily be made in laboratories in hundreds of different ways. Chemical weapons are cheaper and easier to produce than conventional weapons. However, it is well known how strong the toxic and deadly effects are.

Why is the use of chemical weapons not prevented?

Although many international organizations are said to be working on this basis, chemical weapons are still not fully banned and prevented. On April 29, 1997, a treaty banning chemical weapons was signed with the participation of 192 countries. However, countries such as Israel, Egypt, North Korea and Sudan refused to join the treaty. The purpose of this treaty was to prevent the use and manufacture of chemical weapons. In addition, it was decided to eliminate the chemical weapons storage facilities and sites in the countries. This contract is enforced by the organization (OPCW). The treaty bans the use of the most dangerous toxins and their precursors. These include the Soviet-era nerve agents Sarin, VX and Novichok, as well as toxic resin and short-term rentals.

The OPCW determined that any chemical weapon can affect life and cause death, if not death then at least permanent injury. This is due to the toxic properties. Although it has been condemned and criticized by human rights organizations, its use has not been completely phased out and has not caused such controversy.

What are the effects of chemical weapons?

There are many types of chemical weapons, and the damage varies depending on the type. However, many types affect the nervous system, blood vessels, respiration, and blood system. Chemical weapons that make airways and breathing difficult cause poisoning and heart attacks.

The gases sarin and tabun, known as gases that act directly on the nervous system, act on the center of the nervous system causing unconsciousness, blindness and paralysis. Sarin gas causes rapid breathing, excessive sweating, dizziness and vomiting. This gas was discovered in 1938 by German chemist Gerhad Schrader and used in the murder of people in concentration camps (during the German Hitler regime). This gas has been used most extensively because it is odorless and colorless and can act on a large area in a short time.

The use of chemical weapons against the guerrillas of freedom Kurdistan

The use of chemical weapons against the Kurdish people dates back to the 1920s. From the first Kurdish serhildans (uprisings) until today, war crimes have been committed against the Kurdish people. The words of the occupiers, “We drowned the Kurds in caves with rat poison” show the reality of this situation. The clearest example of this is the Halabja massacre. Thousands of Kurds were massacred in this massacre. The gases that Saddam used in Halabja are now being used against the freedom guerrillas in the mountains of Kurdistan.

The occupying and colonialist Turkish state has been conducting a six-month annihilating attack on Kurdistan’s freedom guerrillas in the Medya Defense Zones since April 14. This is undoubtedly directed against the entire Kurdish people and the population in Kurdistan in the person of the guerrilla.

The occupying and colonialist Turkish state is trying to legitimize its attacks by invoking the collaboration of the KDP and the support of NATO, as well as the silence of the OPCW, the so-called Chemical Weapons Organization, even though its actions violate international law .

The attack of the Turkish occupying state on the mountains of Kurdistan with chemicals shows that they are inferior to the will of the Apoyî. The guerrillas deal the heaviest blows to attackers using methods such as ambushes, sabotage, assassination, infiltration and heavy weapons, as well as coordinated actions and revolutionary operations. In the 6-month balance sheet of the war published by the HPG, 2,346 occupying soldiers were punished. The Turkish occupying state did not shy away from using the most brutal methods to hide its losses.

Finally, the press and liaison office of the HPG shared the 6-month balance sheet of the war with the public in a written statement. In this statement, the HPG referred to the use of chemical weapons and prohibited weapons and made the following statements;

“Since the start of the invasion attack on the areas of Zap, Avaşîn and Metîna on April 14, 2022, the invading Turkish army, which did not achieve its objective and suffered heavy blows to the resistance of our comrades, who since the start of the invasion attack with great fought with courage and sacrifice, attacked the resistance areas tens of thousands of times with fighter jets, attack helicopters, howitzers, mortars, tanks and artillery. During this period, the Turkish army, which was actively supported by the KDP and at the same time actively used in the war the mercenary gang segments recruited from northern Kurdistan and Syria, mobilized all the warfare techniques, warfare facilities and weapons offered by NATO and attacked tens of thousands of times , but still could not achieve the desired result against the historical resistance of our comrades. The war criminal Turkish state, which experienced a major blockade in the face of the resistance of the guerrillas of the freedom of Kurdistan, attacked the resistance areas with internationally banned bombs and chemical weapons before the eyes of the whole world. Although our armed forces documented these war crimes in a hot war situation and with the meager means and presented them to the general public, the Turkish army, seeing that there was no deterrent reaction from the international public, took heart and increased its underhanded, cowardly and dishonorable ones Attacks day after day that in no way conform to the laws of war and human morality.

“Encouraged by the silent or supportive attitude of the international organizations, the AKP-MHP government has developed a new concept for the invasion of southern Kurdistan in 2022, based solely on the use of these banned bombs and chemical weapons. Although the Turkish army has used individually banned bombs and chemical weapons in different places and times in the past, it is doing so systematically in 2021 and especially in 2022. During the six-month war between April 14 and October 14, 2022, we found that the Turkish army used banned bombs and chemical weapons 2,467 times. The identity of our 27 comrades who died in these attacks, was disclosed to the public in previous statements. Just recently, 17 more of our commanders and combatants were murdered with the same weapons.”

Recordings that reveal the truth, without words, without comment