YOUR SILENCE KILLS: War crimes of the Turkish occupying state against the guerrillas

by Firaz Dağ
in All News, Editorial, Headline, Kurdistan, Middle East, News, World, Your Silence Kills
A A
0 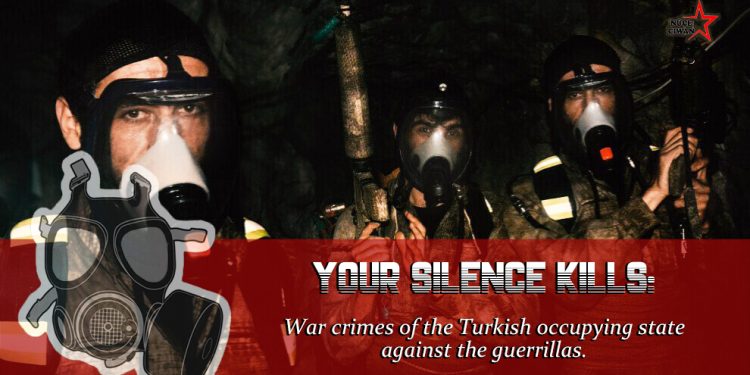 NEWS CENTER – Since the beginning of the invasion operation, the HPG has reported attacks by the Turkish occupation forces with chemical weapons, poisonous gases and banned bombs. Already during the invasion operation in 2021 in Garê, the Turkish occupation soldiers made use of chemical weapons against the victorious resistance of the guerrillas. However, despite the massive war crimes, the attacks that take place far from any conscience and humanity, the international community remains silent and doubts the accuracy of the information provided by the HPG.

Our news agency, since the HPG reported attacks with tactical nuclear bombs, has started a comprehensive research and has collected and evaluated for the public, the information given by the HPG. Thus, not only the extent of the war crimes is revealed in all clarity, but also the significance of these attacks, which will plunge humanity into a great tragedy if the Turkish occupiers are not stopped. The dossier presents itself with the following contents and from now on will present another part every evening. Even if this dossier does not claim to be complete and scientific, it shows the public very clearly what it means when people and, as in this case, guerrillas are attacked with such weapons of mass destruction, and also what it means when the international public remains silent in the face of this. In this sense, we hope that this dossier will develop its desired influence and urge people, especially the youth and young women in all parts of the world who still have something like a human conscience, to finally do something against these war crimes.

Because what happens in Kurdistan, what happens against the guerrillas of the freedom of Kurdistan, exerts its influence on the political world events. Even if it is not recognized today, it can be tomorrow that these weapons are also used against other freedom fighting movements and groups, that these weapons are used against other oppressed peoples, while the international agenda is silent about it. History has shown what fascist states are capable of, so let us not allow history to repeat itself again.

In the six-month war record of the HPG (Hezên Parastina Gel – People’s Defense Forces), it was announced to the public that since the beginning of the war, April 14, 2022 until mid-October, the Turkish occupying state has used chemical weapons, prohibited explosives, tactical nuclear weapons, as well as thermobaric bombs 2476 times.

Reports of the use of chemical weapons were published as early as 2021, when the Turkish occupying state began attacking the Garê resistance region on April 23 and met massive resistance from the guerrillas. Especially in the war tunnel Werxelê, near Avaşin, epics were written with a heroic resistance against the use of chemical weapons that were spread through the media via sound recordings, video footage and visuals. After the fascist AKP-MHP government publicly admitted its defeat in Garê, the new invasion operation against the defense areas, first of all Metîna, Zap and Avaşin was bombed with chemical weapons right at the beginning of the invasion and as well as use of prohibited weapons was intensified in order to achieve quick results and make a cruel massacre on the mountains of Kurdistan.

While the international hegemonic powers, due to their interests, remain silent towards these war crimes, the reactions of relevant institutions are also absent. The reactions of the public are also not having the effect they should have. After it became known that the Turkish occupying state used chemical weapons against the resistance areas of the guerrillas in the south of Kurdistan, some reactions came from the society, especially the youth showed reactions, especially in Europe and for example occupied the square in front of the OPCW for one day in December last year.

Nevertheless, the OPCW does not respond to the demand to investigate the uses of chemical weapons and banned poisonous gases in the regions in the south of Kurdistan. Delegations that traveled to the south of Kurdistan to carry out an investigation on the ground were massively prevented from doing so by KDP forces. However, the limited information gathered during the delegation trips suggests that chemical weapons and poisonous gases have been used on a massive scale in the Medya defense areas and continue to be used.

In the meantime, a report by the English journalist Steve Sweeney was published in German and English and sent to the OPCW, but still no reaction from this institution.

The medical peace organization IPPNW (International Physicians for the Prevention of Nuclear War/ Physicians in Social Responsibility) made inquiries about the violation of the ban on the use of chemical weapons by Turkey and attacks on Kurdish civilians and the guerrillas of the Freedom Movement in Northern Iraq, Southern Kurdistan and traveled to the area on September 20 to September 27, 2022. Their research and findings were published in a written report on October 12, 2022. Commenting on the report, IPPNW said while urging investigation of the areas:

Despite this, silence has been maintained at the international level. In the German Bundestag, there were questions regarding the published report of the IPPNW, but the German government referred to the responsibility of the OPCW and explained that Turkey had signed the Convention on the Prohibition of Chemical Weapons on April 29, 1997, and had also declared at that time that it had no chemical weapons in its own stockpiles. In addition, the federal government stated that the OPCW would have to decide whether Turkey had complied with the treaty; however, Turkey, as a party to the treaty, was also part of the OPCW’s monitoring mechanism.

On October 18, the NPG announced 17 fallen guerrilla fighters as a result of the use of banned warfare agents. Previously, the HPG had repeatedly announced the identities of fallen combatants killed by chemical weapons and tactical nuclear bombs. According to the NPG’s October 18 report, 44 guerrilla fighters have now died from the use of these banned weapons and horrific war crimes.

Meanwhile, the Kurdish public has no doubts that chemical weapons are used, but towards nuclear weapons the reactions are completely absent or people have great doubts that this could really be the truth. True, the use of nuclear explosives is not a simple matter and could trigger an international dilemma.

While there is talk of the Ukraine war about the possible use of tactical nuclear bombs and chemical weapons, which has rightly led to the demand of closer investigation on the part of international politics and public opinion, the Turkish occupying state continues to bomb the guerrilla areas with prohibited weapons and enjoys the silence of the international powers, as well as their support. Because one thing is certain, while Ukraine has a state and its political foreign relations, this possibility has not been granted to the Kurds so far. Moreover, these different reactions to war crimes show that the political interest behind the reaction of the international hegemonic powers is also decisive.

What has been attempted with the government in southern Kurdistan neither represents the interests of the Kurdish people nor defends their rights, quite the contrary. The state policy of the Barzani clan shows the line of betrayal and imperialist hegemonic policy by which this micro-imperialist state is so massively supported and promoted.

So, instead of raising its voice and protesting against Turkey’s occupation invasion on its own territory, the KDP is still supporting the occupiers in the hope that it can thus also maintain its own power, which is steadily falling within the society in the south of Kurdistan and internationally.

In the following, we have evaluated the reports and assessments of the HPG and PKK, as well as various visual and video materials, testimonies around the current ongoing occupation invasion, in order to give a rough overview specifically of the war crimes committed by the Turkish occupying state. In addition, we will go into more detail about the weapons that have been used against the guerrillas in a prohibited manner on the orders of the fascist AKP-MHP government. Afterwards, we will also evaluate the collected image and video material in a video and will not only discuss the support of the KDP in this war, but also the support of NATO and the background of the silence of the OPCW. We will conclude this dossier with an outlook and a concrete call to action to stop these crimes against humanity and to be worthy of the guerrillas’ self-sacrificing struggle.

Will continue tomorrow with “History of war crimes (chemical weapons and explosives use according to HPG reports) (annex collected HPG reports).”

HPG: The guerrillas were attacked 14 times yesterday with forbidden bombs and 11 times with chemical weapons

Şehid Sara Tolhildan: “The reality that makes the PKK the PKK is the value of truth in the Hevaltî”

Şehid Sara Tolhildan: "The reality that makes the PKK the PKK is the value of truth in the Hevaltî"